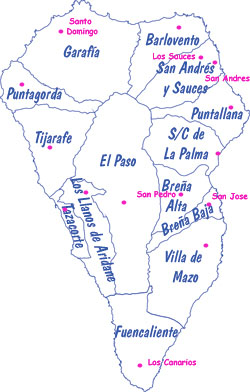 There’s a really simple reason why they can’t find them. They don’t exist. Breña Baja and Fuencaliente are municipalities, and their town halls are in the villages of San Jose and Los Canarios, respectively. It like driving all over the south east of England, looking for the town of Sussex.

The map shows the 14 municipalities (in blue) , with their administrative seats (in pink). Where there’s no name in pink, the municipalities are named after their chief villages, which makes things simpler. Just to keep things interesting, one, San Andrés y Sauces, is named after the two biggest villages. The town hall is in Los Sauces, which is much bigger and on the main road.