The main roads on La Palma form a rough figure 8, with the main east-west road being the LP2 from Santa Cruz to Los Llanos, through the tunnel. But whenever I’ve got time, I like to take the scenic route, the LP203. This winds up through the heather and bayberry forest, then pine forest, past the barbecue and picnic areas at Pared Vieja and El Pilar. Just west of the top, you pop out of the forest at the Los Llanos del Jable viewpoint. From there you get a great view of El Paso and Los Llanos, the south wall of the Caldera, and Montaña Quemada.

Montaña Quemada means “burnt mountain,” and it’s easy to see where the name comes from. The only recorded eruption here was in the 15th century, but it looks much more recent than that. The ground is covered in volcanic gravel called lapilli. Don’t try to walk in sandals because the darn things get between the sole of your foot and the sole of the sandal, and they’re very uncomfortable.

Going west from Los Llanos del Jable, the road winds down through pine forests until it rejoins the main road. 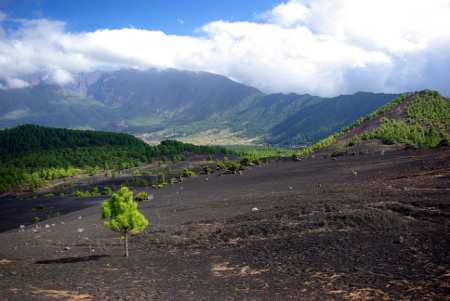