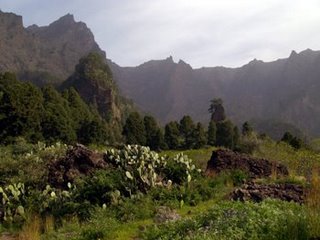 In 1825, the German geologist Leopold von Buch studied the Caldera de Taburiente and concluded that the crater was formed by the emptying of a magma chamber below. He was sufficiently impressed with it that he gave the name “caldera” to all such formations. (See http://en.wikipedia.org/wiki/Caldera). Mauna Loa, on Hawaii, has a caldera. Olympus Mons, on Mars, has a caldera.

And the Caldera de Taburiente isn’t a caldera! Von Buch got it wrong. It looks like a caldera, but it was actually formed by erosion.

However I formed, the Caldera is impressive. It’s 5 miles (8 km) across, and most of the rim walls are almost 6,000 ft (1,800 m) above the floor. I’ve heard several people say that it looks bigger than the Grand Canyon, because your brain can just about cope with the size of the Caldera, and it just gives up with the Grand Canyon.

The geology is spectacular, but the most special thing about the Caldera is the water. The Taburiente is the only year-round river in the Canary Islands. True, a lot of water is taken out for irrigation, so that in summer the “estuary” is reduced to an underground trickle. But, except in the driest summers, you can hike all day without a water bottle, just drinking from the streams as you cross them. (But take an empty water bottle unless you’re pretty flexible. It’s a lot easier to fill the bottle and then drink, than to get both hands down to the water.) That means lush vegetation in the lower parts, even willow trees.