This weekend will see the biggest livestock fair on the island, in Garafía.

San Antonio del Monte used to be a village, but the villagers moved away. About the only thing that’s left is the church of St. Anthony and the feast day, with it’s massive fair. Apart from the animals, there’s a craft fair, and of course lots of stalls selling cheap toys, food and drink.

It’s a pretty enough little church, and for most of the weekend it will be crowded with people visiting the saint and touching his belt.

On Sunday, after the special mass, the statues are taken out to the fairground in a procession, and the priest blesses the animals.

The weather can be baking hot,  but as you can see from the photos, sometimes the clouds blow in. It’s a good idea to take both sunscreen and jumpers. 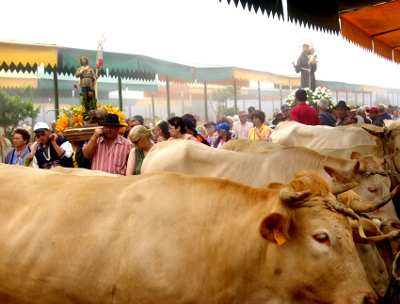 The procession to bless the animals

After the procession and blessing, they have live music and dancing.

This article has 3 Comments