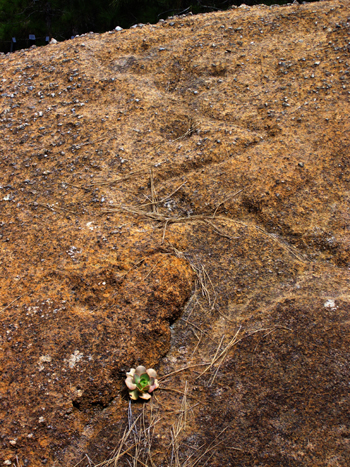 The people who lived here before the Spanish invasion in 1493 were called Benauaritas. Since they didn’t have writing, not all that much is known about them, and what there is comes from the invaders. Not exactly an unbiased source!

Their technology was pretty basic, maybe because the climate in La Palma is kind enough not to encourage things like weaving. They wore skins, lived mostly in caves, herded goats and grew barley. They also collected things like shellfish and wild dates. There were fourteen tribes on La Palma, and each tribe had its own territory. The modern municipalities roughly correspond to the old kingdoms. Much of their history and culture has been lost.

But they did leave behind rock carvings. These are inside the Caldera de Taburiente, but there are far more spectacular ones at La Zarza (in Garafía) and Belamaco (in Mazo). Archaeologists believe that they poured a libation of goats’ milk onto the stone, which would flow down the channel, making its shape stand out clearly.

I have a very strange mind. It looks to me as though the stone is imprisoned, presumably because it’s dangerous. 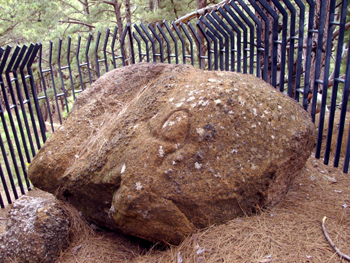