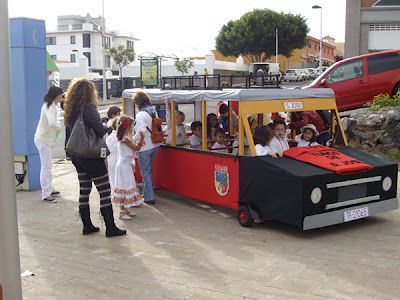 Spain celebrates Carnival in the week before the season of Lent. I always say people are making sure they have something really juicey to repent, but these days most people just regard it as a darn good excuse for a party.

It wasn’t always that way. Franco banned Carnival. It’s always been a time when people could say and do things they wouldn’t normally get away with, and perhaps he didn’t want people walking aruond with placards asking inconvenient questions. Perhaps, more seriously, he thought that a couple of thousand people in the with several drinks inside them might just start the counter-revolution. You know, like the old song, “As soon as this pub clo–o–ses, the revolution starts.” Or perhaps he just felt that people should be working hard instead of having fun.

So there was no Carnival in the street organised by the town hall. Instead every club on the island held a “Winter Fiesta” that week, complete with fancy dress.

Carnival’s just getting into serious gear, although the funfair’s been here for a week. Last night was the children’s parade. The photo shows the kids from the local infant school practising with their Carnival bus. The bus’s weight is taken on its wheels, but it’s pushed along by the kids, like Fred Flintstone’s car.

The school were delighted when I went around with photos.